Impressions of Lean and Kanban 2010 Europe

This post is short summary as well as a collection of ideas and impressions of the Lean and Kanban gathering in Antwerp organized by Agile Minds. According to David Anderson (one of the speakers) it has been the biggest conference on this topic so far: agilility is spreading in software development ( let it be Scrum, Kanban or any other agile methodology) and it is also growing on enterprise level.

There a some situations in which Scrum is not really applicable to manage a project because you might not be able to even plan the backlog items for one sprint. A good example is maintenance of a software product, where new bug reports come in at every time and need to be addressed as soon as possible. In this scenario scrum does not scale very well, even if you select the time for a sprint to be very short. This is where Kanban can help. 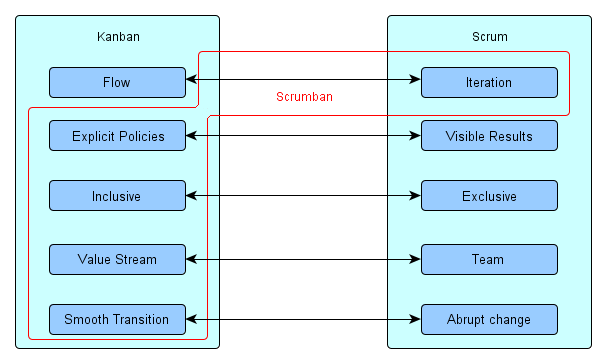 The key concept of the two methods is to create a structure to deal with changes as well as limiting the workload which is in progress. Scrum does so by introducing sprints ( iterations which are planned and executed). The plan for a sprint is fixed (negotiated by the product owner and team) and should normally not be changed. If the sprint goal is not needed any more, it is possible to cancel a sprint. This means Scrum limits the workload of the team by ad-hoc planning of only one sprint in advance and by using the sprint time limit. The process is inspected after each iteration and adapted.

Kanban on the other hand focuses on visualizing processes  and it limits workload by explicitly setting limits on each step of the process. There are no iterations, but value stream instead. The idea is to maximize the throughput of the process and eliminate waste (everything which can lead to bottlenecks and impediments). Kanban also implements the so called pull principle. This means the work item needs to be pulled from one process step to the next one and not pushed. It ensures that people only take an item when they are ready and thus are not overloaded with work.

Both methods emphasize that the goal is to deliver as much value as possible to the customer to achieve the highest customer satisfaction. They rely on a prioritized backlog of items which are then broken down into user stories.

Scrum uses the Definition of Done to create an agreement on when a work item / piece of software is finished and ready to be delivered. The Definition of Ready is an instrument for the team to define what they need to start working on an item.

Kanban can also uses those definitions. Kanban defines when something is ready or done on the process steps which is more fine-grained than the over all definition of done.

Which flavor to use?

Well this is depending on you, your project and your company culture. My personal résumé is that there are a lot of agile practices which can be used on all different agile processes. It seems to me that starting Kanban can be easier to do because it requires less changes to be done. Also Kanban or Lean Management seems to be easier to integrate on enterprise level than for example Scrum of scrums which makes a lot of synchronization necessary between different teams.